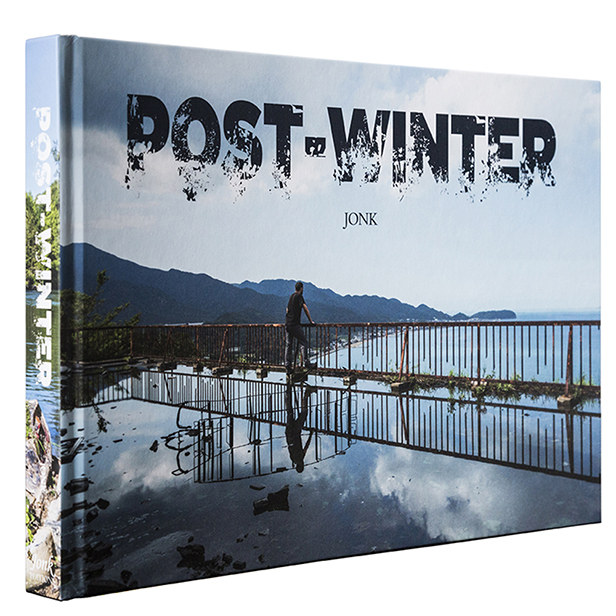 A word from the author and the publisher:

It all started on a Kiev-Paris flight in the spring of 2017, after my third solo trip to the Chernobyl Exclusion Zone. On the plane, I realize that I want to write a story, that of a man who would have survived a global cataclysm and who would find himself to be the last Man on Earth.

The project matures for a year, the scenario of the story develops in my head and it is in another flight that I put everything black on white. In the Tokyo-Paris that brings me back from three weeks of wastelands in Japan, I fill six pages of notes. Almost everything is there.

Moreover, during this year of maturation, I realize that I could illustrate this story with self-portraits made in abandoned places, perfect settings to represent the world after.

I haven’t touched the text for over a year. At the end of 2019, I finally settled on this project. My idea is to make about 200 pages including 50 of texts. So I have to develop my six pages of scenarios into fifty pages of narrative. As writing is not my strong point, I propose this essay to my childhood friend Amélie Gressier who has been working for several months on her first novel. She accepts and, after many back and forth between us, gives me a magnificent text of 41 pages, faithful to my basic scenario and very well written. We talk a lot about “lock down babies” and this book is one of them. Indeed, the first lock down made it possible to move forward very quickly on the draft.

In parallel with the creation of the text, I take photos until my last trip before the assembly of the model in September 2021.

For this project, I therefore stepped out of my comfort zone. This is my eighth book and will be the first that is not centered around photos. It could be called an illustrated post-apocalyptic novel but it clearly doesn’t fit into any box. This book is a first of its kind and I’m very proud of the result.

Here is the text from the back cover:

2026, somewhere near Paris. A worldwide conflict and the ensuing nuclear winter will soon lead to the end of life on Earth. Caught off guard, a scientist specialised in cryogenics decides to be the first human guinea pig for his own experiments and sets his alarm to wake him up ten years later. When he opens his eyes again, the world has changed in many respects but above all, he is now alone. And so, he heads off on a long journey to visit some towns he held dear and try to reach Japan, the place he had always dreamt of going in his past life.

Will he make it? How will he survive? And get around? But above all, is he really alone?

With the help of Amélie Gressier who transformed ideas into words, the photographer Jonk, takes us along on this suspenseful adventure full of surprises…