The pictures below are available as prints in editions of 250.

They are printed on 50x75cm Hahnemühle Fine Art paper with a 5cm white border, signed and numbered on the front, rolled in tubes and sent worldwide.

The price is 160 euros including shipping costs.

Bigger dimensions on smaller editions are available. Other supports too. Just ask me for information if interested. 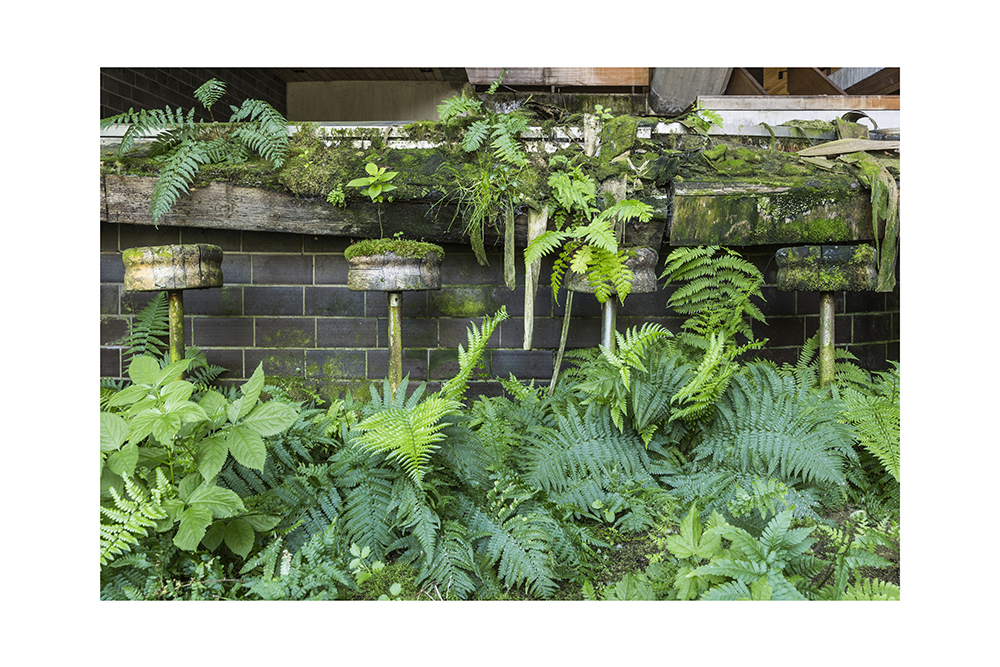 I shot this picture in an abandoned school in Croatia. It shows a detailed view of the bar that was located in the atrium of the main building and was supposed to be the student’s life place. It was actually a political school, built in 1970 and used until 1990 when it suffered the burst of Yugoslavia. A prime minister got out of this school.

There was not much to shoot in this place, an empty gymnasium, a dark theater, but this overgrown bar was worth the trip by itself. I realized this shot on my first trip to former Yugoslavia in summer 2016. During this solo journey, I started in Budapest and covered 5500 km across what are today Bosnia-Herzegovina, Serbia, Croatia, Kosovo, Montenegro, Macedonia and Slovenia. This place was one of the highlights of my trip and this picture is one of my favorites ever in my Naturalia series. 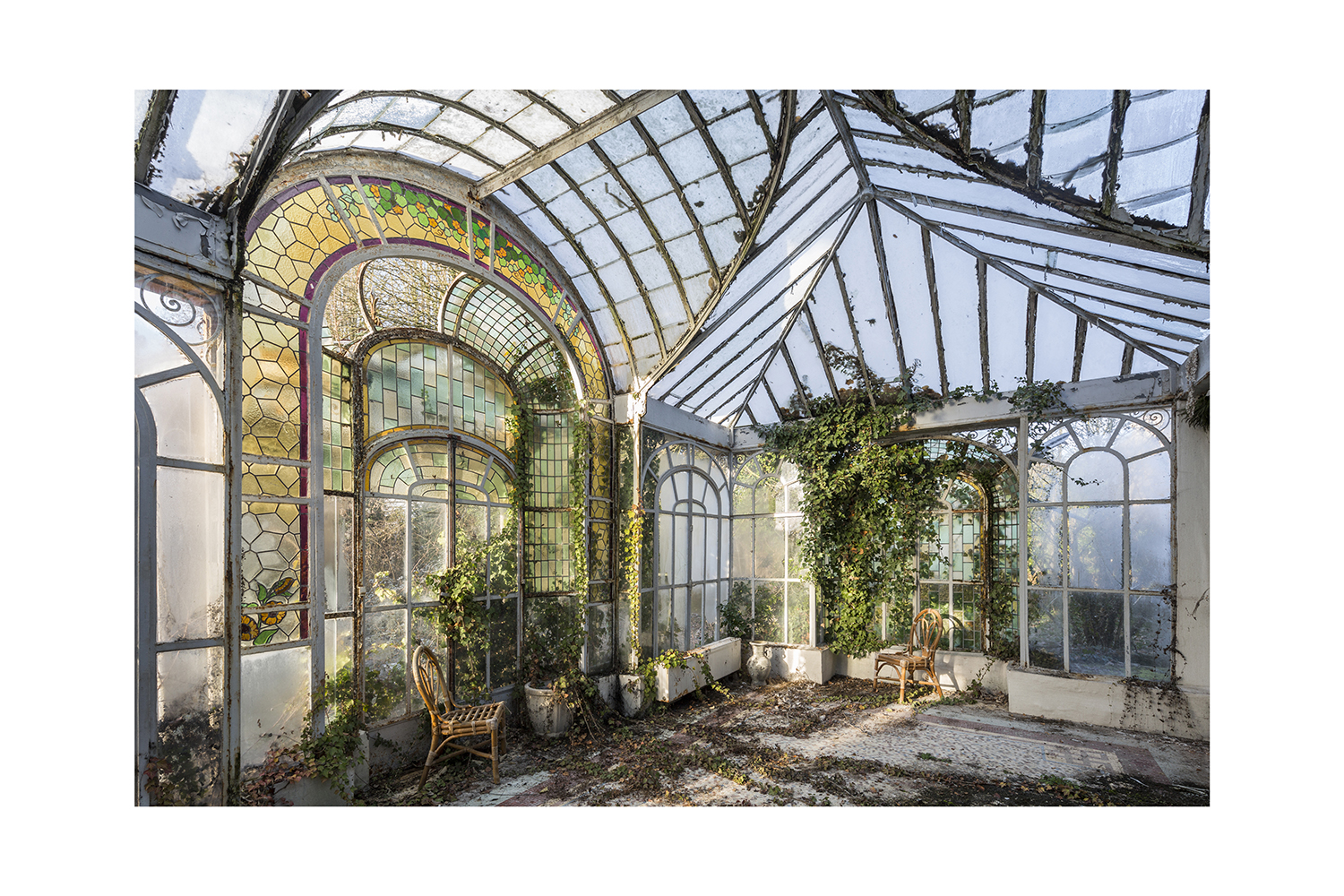 This winter garden is part of a large mansion in a small village in rural France. The mansion’s domain is quite large also and includes a few other buildings. Even if it may look different on the picture, everything was quite recent and not long abandoned so this room is the only one I shot there. I shot every possible angles though! Of course, the trip was worth it just for that winter garden, especially with the morning light of January. It is a winter garden after all! 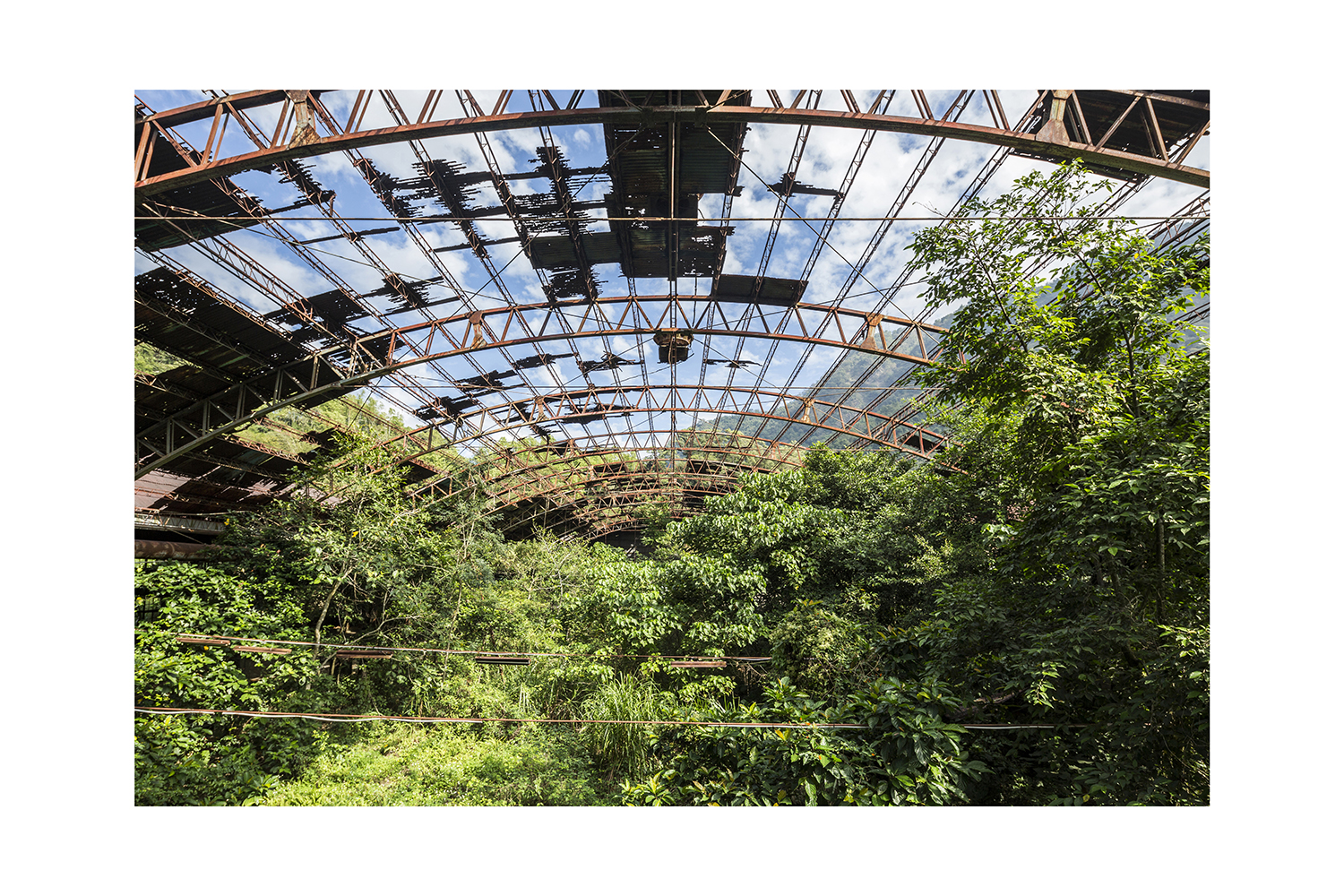 This warehouse is part of an abandoned sawmill. It is so overgrown that it is hard to tell if it was used for production or just storage. Anyway, once the work place of almost 2000 workers, the facility is now home of tens of monkeys that scared the hell out of me when they started banging on what is left of the roof.

I shot this picture during my trip to Taiwan at the end of 2017. During that trip, I shot as much abandoned places as casual touristic places. This country was a great discovery for me, I will especially remember the night markets where we went to have diner almost every day. Those markets were actually a great photographic subject too! 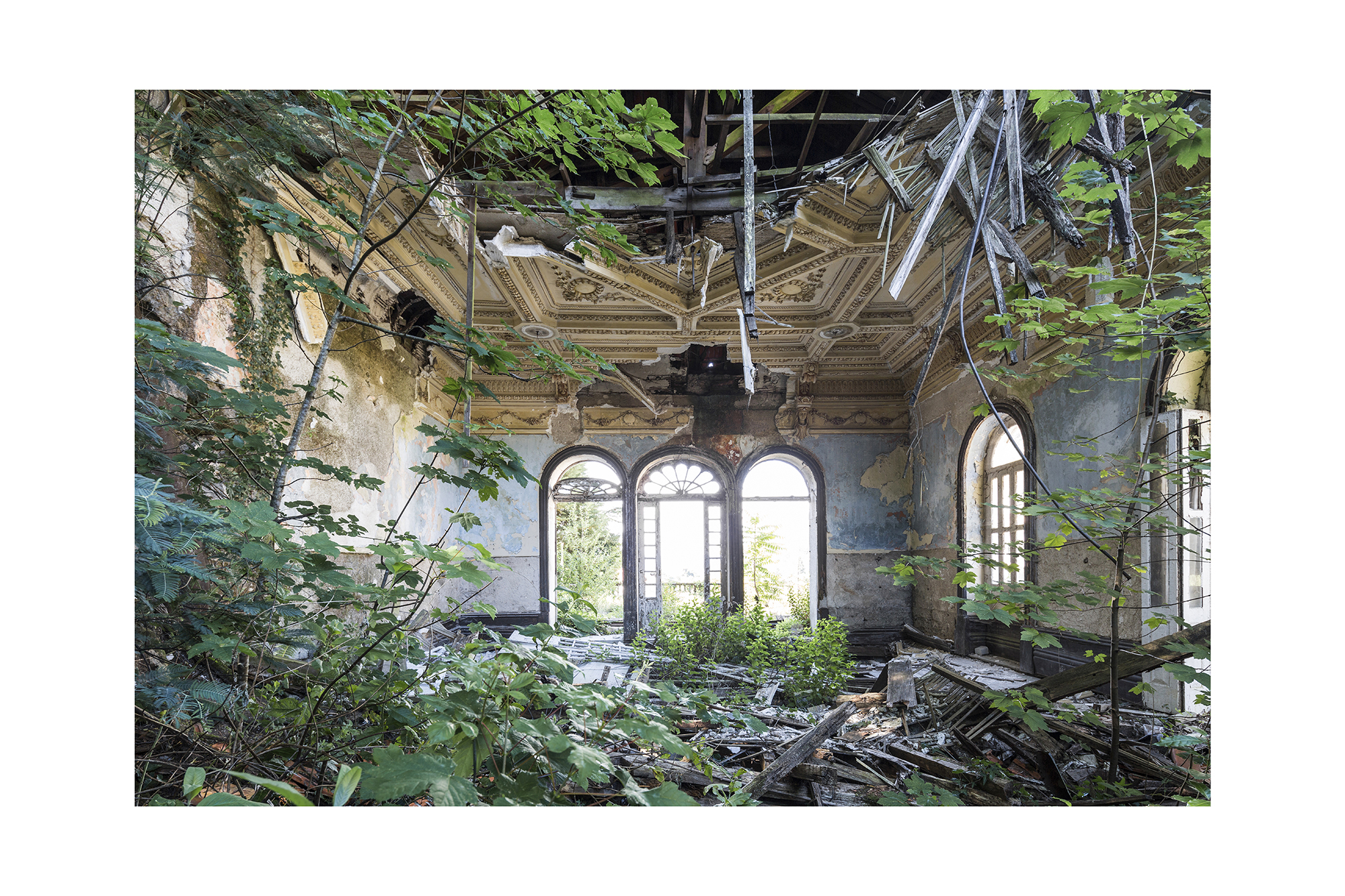 This is the only part left of a beautiful hotel located in a small town in Portugal. A few months before, there was still the main building with the rooms but I arrived too late and it had been demolished. This dining room shows how magnificent that hotel was. Even that part has its days counted as it is slowly collapsing. There is no roof anymore behind where I am standing.

I realized this shot during a 10-day solo trip to Portugal. I shot a few beauties during this trip including this dining room that has everything I like: decay, colors, nature… This trip ended with a 3-day visit of the city of Porto that I did not know at the time. I like to take advantage of being abroad to not only visit abandoned places but also make a bit of normal tourism! 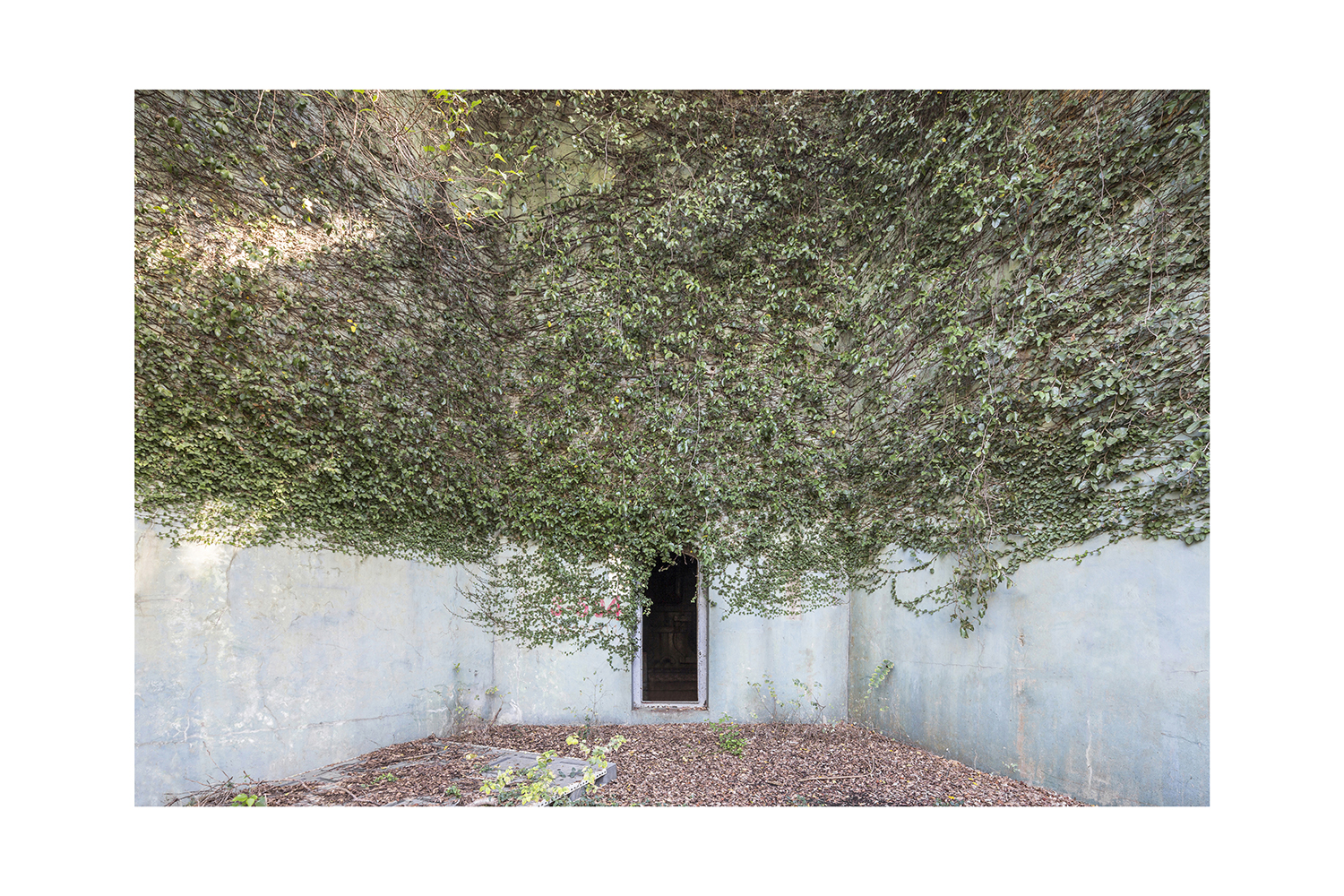 Another shot I made during my trip to Taiwan. It is supposed to be an oil reservoir that is no longer in use. Behind that door was a whole system of valves and pipes.  I guess the reservoir itself was beneath the ground behind. I had to climb a high fence to get there. This exploration was very strange as the compound where this reservoir is located seemed to be used by some kind of association. Even though it was a Monday I saw no one. Maybe it opens only on weekends… Sometimes you need to have luck on your side to make a shot. 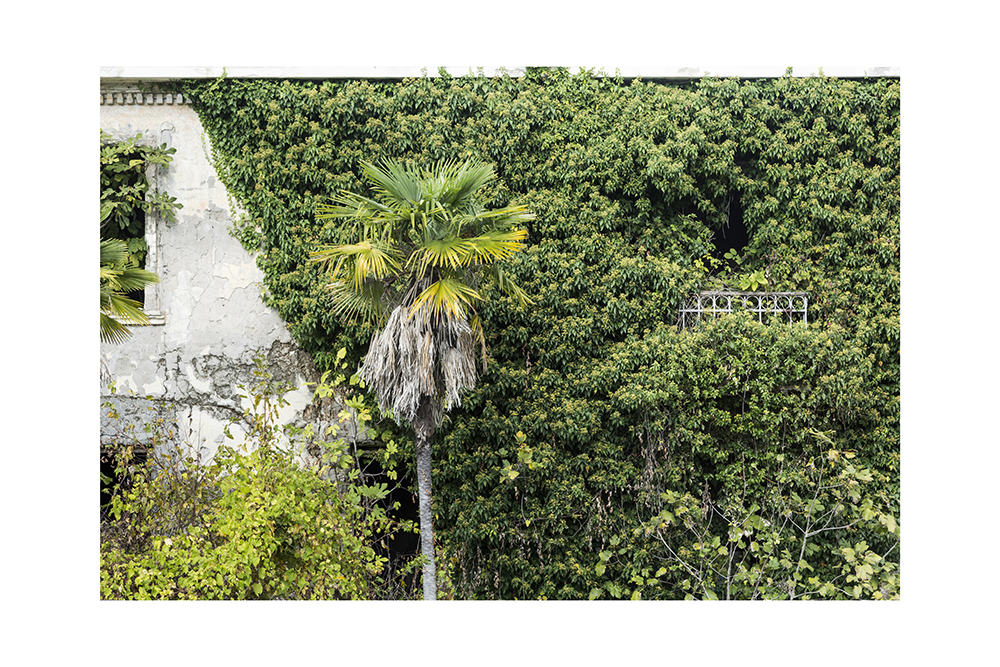 This shot is from my last trip to Russia when I also went to the unrecognized state of Abkhazia. The region self-proclaimed its independence from Georgia almost three decades ago, right after the fall of USSR. And after quite an atrocious war… While driving with my two friends we noticed this place, quite far away on a hill, that clearly seemed abandoned and promising. When entering, I had no way to guess that it was a theater. Even if there were no more chairs, the main room was beautiful thanks to the high level of decay, textures and colors. As we were back in car and leaving, I noticed that outside wall of the theater. I loved it right away, got out of the car and shot it. That palm tree in front of such an overgrown wall, good light, and above all, that window and small balcony on the right, looked just great to me. This is my favorite shot of that place, certainly of that day too, and maybe even of the whole trip! Unexpected finds along the road always have a special taste… 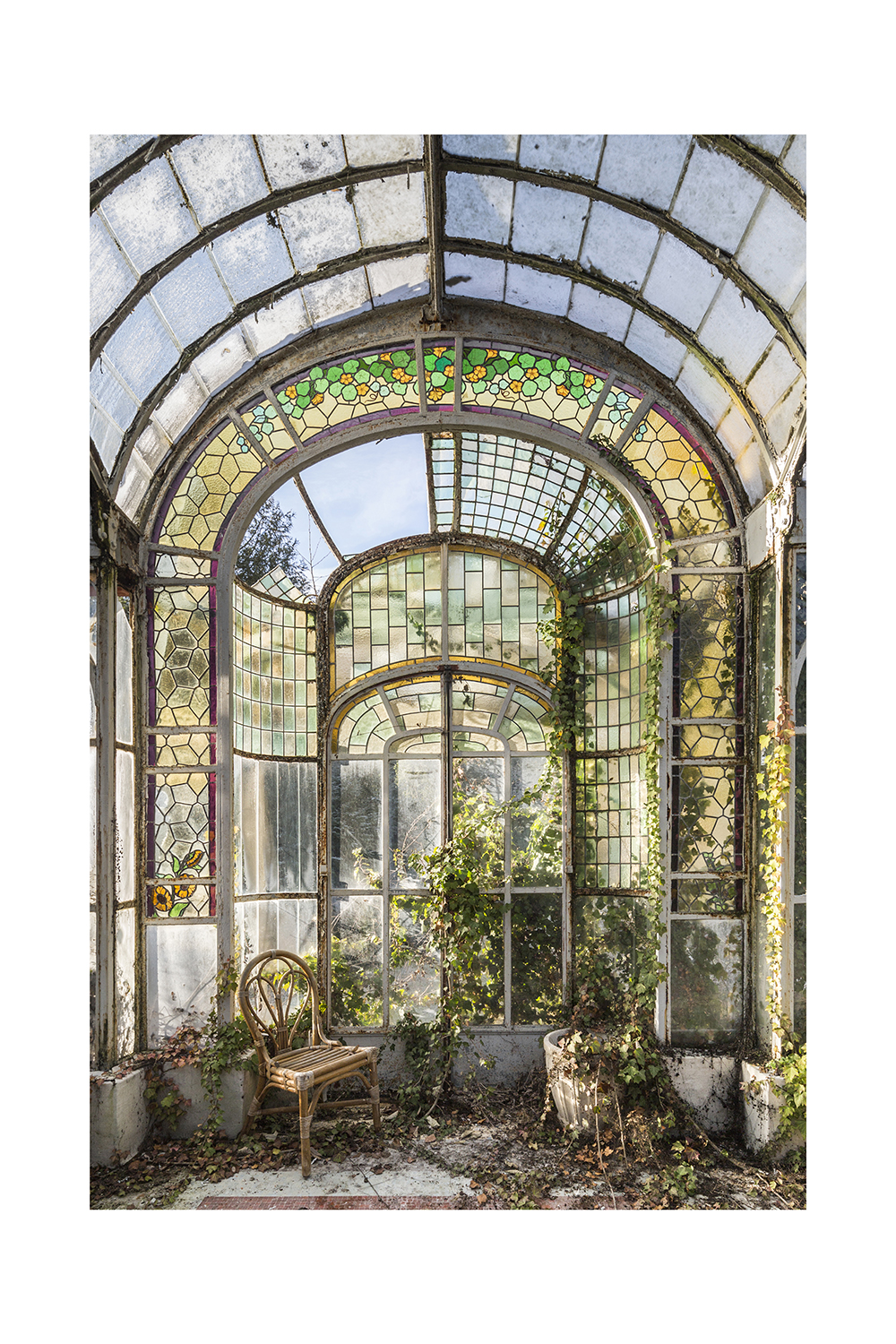 This is the second print from this beautiful place. The first one was a success and I think that this picture is even better. Actually when I posted it on social networks, I never had this much engagement ever.

You will find a bit more about it above, in front of the first print. 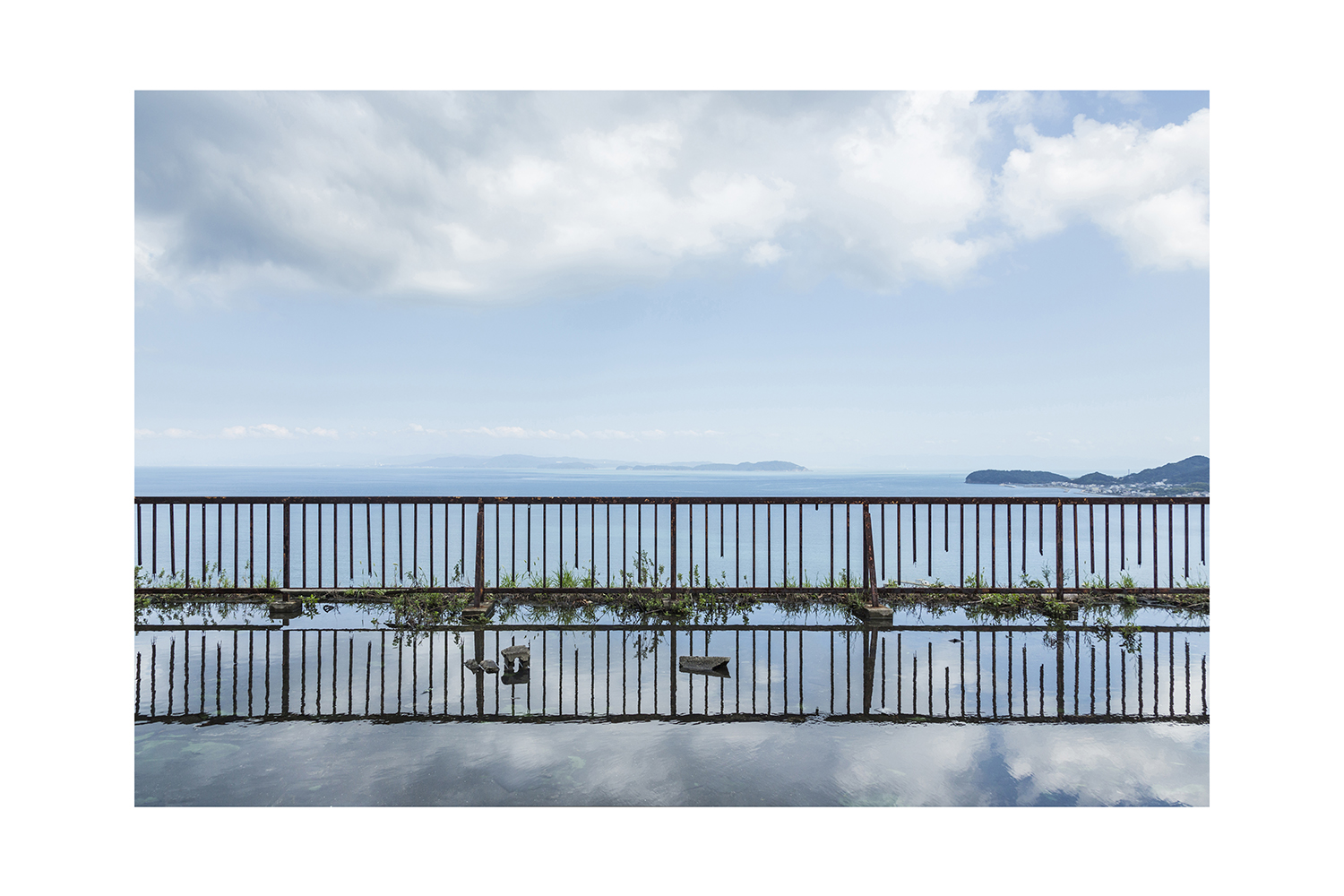 I shot this picture during an 18-day trip to Japan in September 2018. I made this trip with my good friend Nicolas with whom I did not only visit abandoned places but also did some classic tourism as it was my first time in Japan. We spent a few days in Tokyo and visited several cities like Kyoto, Hiroshima and Nagasaki as well as a few interesting landmarks like the Miyajima Torii or the Kokoen garden in Himeji that I loved.

This hotel is located on the southern coast of Japan not so far from Kobe-Osaka. It was one of the highlights of the trip as this hotel had a few interesting rooms to shoot but also a beautiful bar that will certainly be one of my future prints. It was a 5-storey building and this roof was actually on the second floor right above the bar. With big typhoons in this area and stagnating water on that roof, I am pretty sure that it will soon collapse. 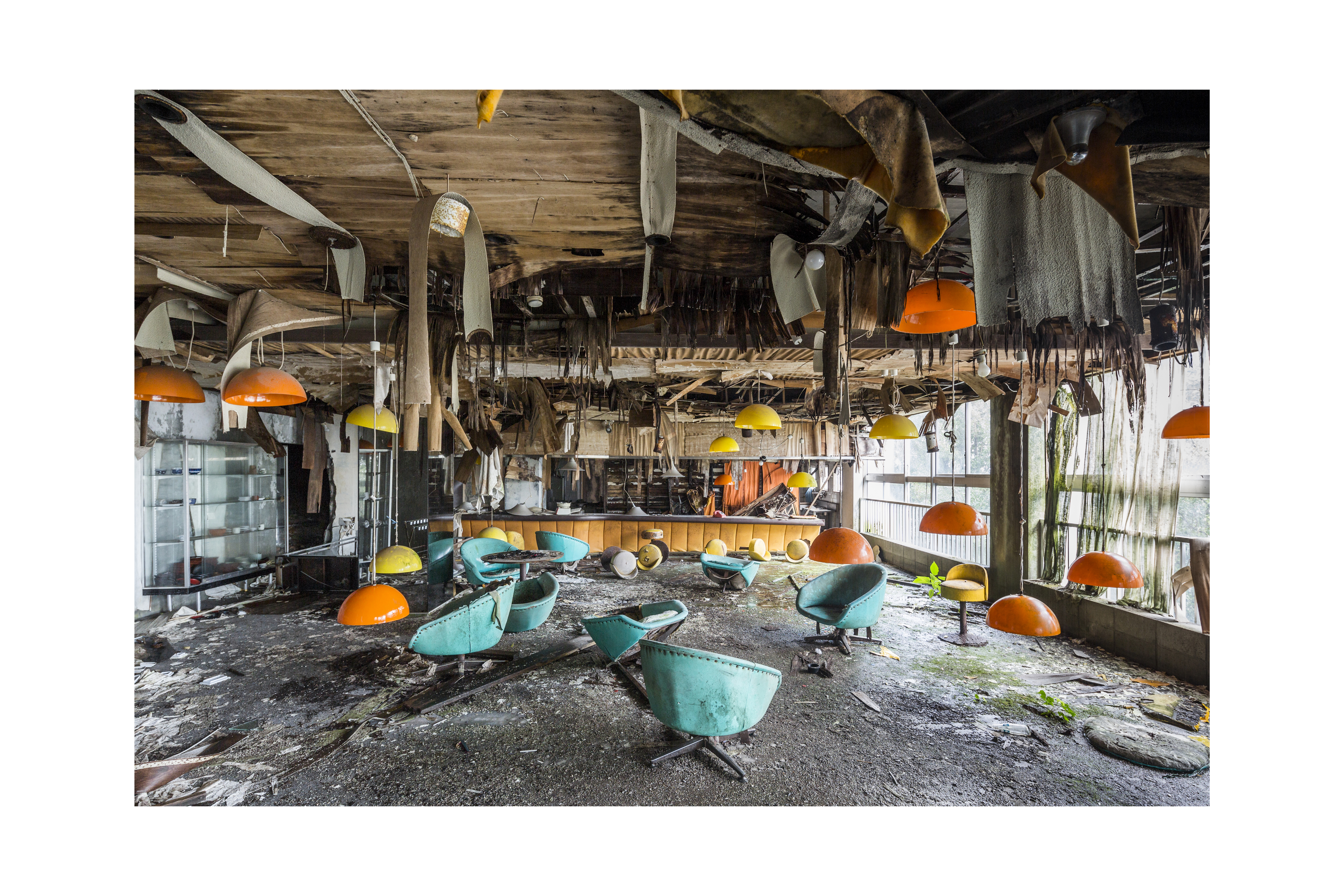 I shot this picture at the same location that the one above showing a flooded roof and a sea view. This bar is actually located right below that roof. To me, there is everything I need to make a good picture: colors, geometry, decay and even a light touch of nature coming back if you look well. Right behind me, there was another area that was more the lounge part of this bar. It was as beautiful as this one with its beautiful blue sofas and chandeliers. But this is another story… 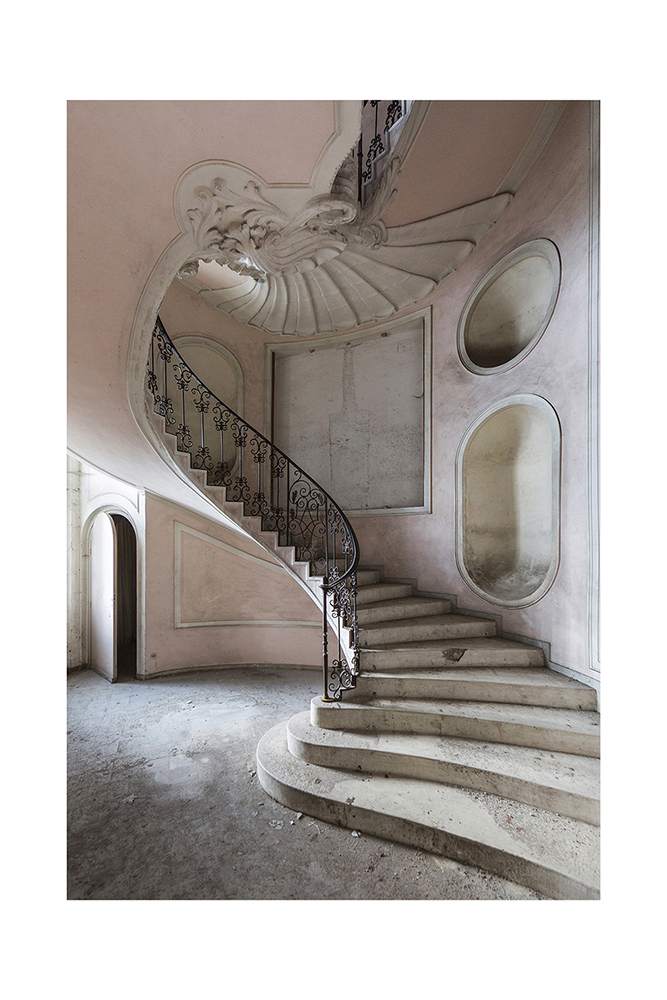 Located on the outskirts of a small town in Piedmont, the origins of this villa date back to the 15th century. It was successively the residence of many counts and marquis, one of whom gave it its current form in the 17th century. It has been abandoned since the late 1950s.

Italy is full of this kind of wonders and I try to go there once a year to photograph my last abandoned discoveries. I visited this villa during my 2019 trip. It is huge and I think I will present you one or two other prints from this place. 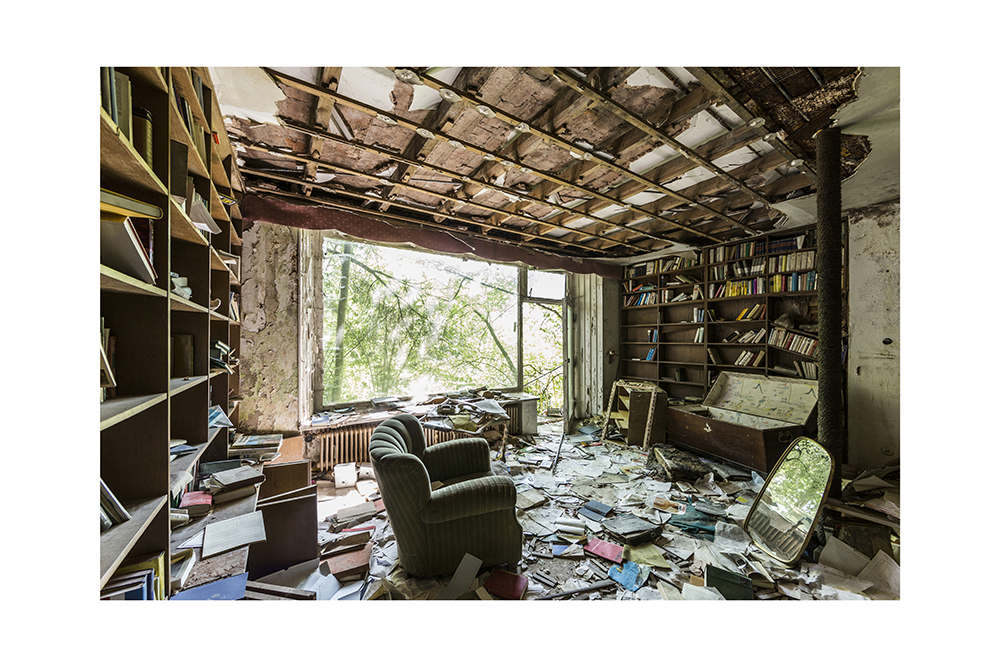 I took this picture during my second trip to Germany in August 2015. Located right in the middle of the country, in a very small town, this place remains to this day one of my favorite explorations. This room is part of a large house, the ground floor of which served as a medical office. During my visit, the two operating rooms were still equipped with all the equipment. The two upper floors served as accommodation for the doctor and his family.

Many photos from this place are still today among my favorites: the master bedroom with its animal skin at the foot of the bed and the falling wallpaper, the pink-toned living room with a beautiful grand piano, but mostly this room that stands out. It has everything I love and evokes a lot in me. First of all the many lines, of the shelves and the ceiling in particular, create a structure that I like very much. The mirror, the open trunk, the large window which opens onto the light and the vegetation add enormously. This door which the viewer does not know where it leads also brings mystery. And of course, the chair! who invites you to take a book and sit … 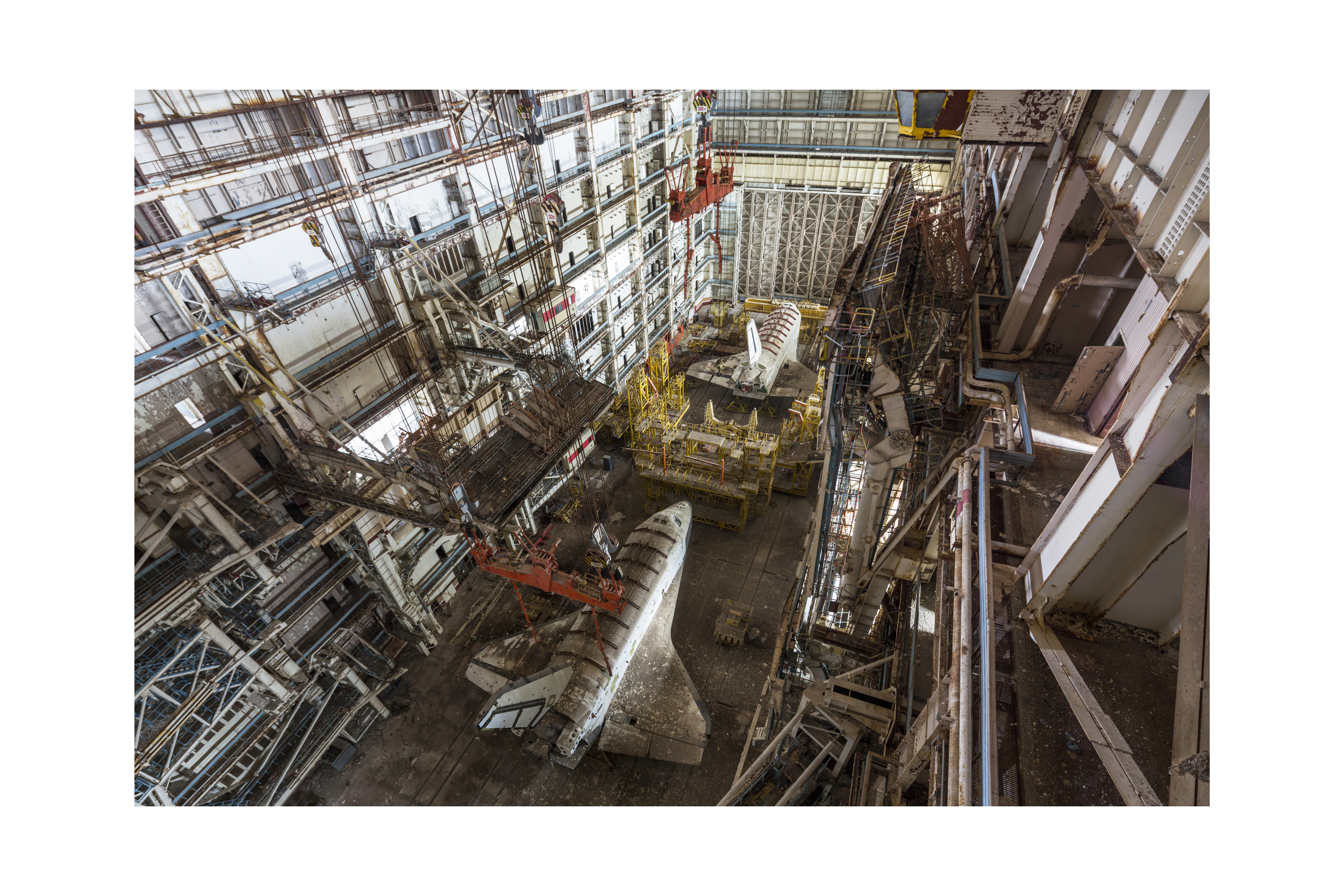 I shot this picture during what is to this day my most amazing adventure. I infiltrated the Cosmodrome of Baikonur, an active site where rocket launches often take place, walked 20 km through the desert, by night with a 22 kg backpack. I slept three nights in abandoned hangars before coming back and walk again 20km by night. During this trip, I could shoot two abandoned space shuttles in a hangar and an abandoned rocket in another hangar. The story behind this picture, both the Soviet Space Program and my expedition to get there, are told in detail in my book: Baikonur/Baïkonour available in French and English. 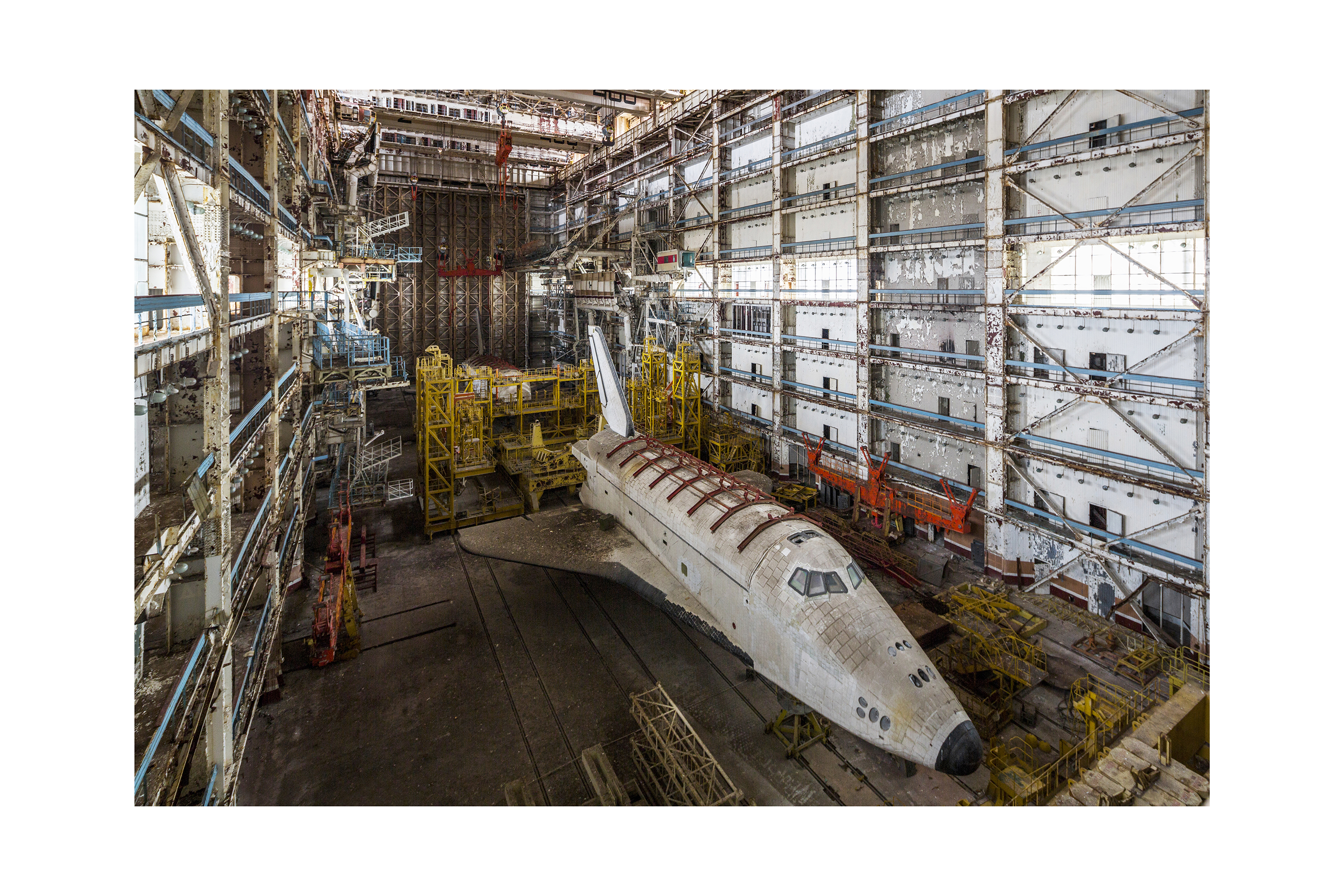 The first print from the Baikonur series was a success, so here is a second one! 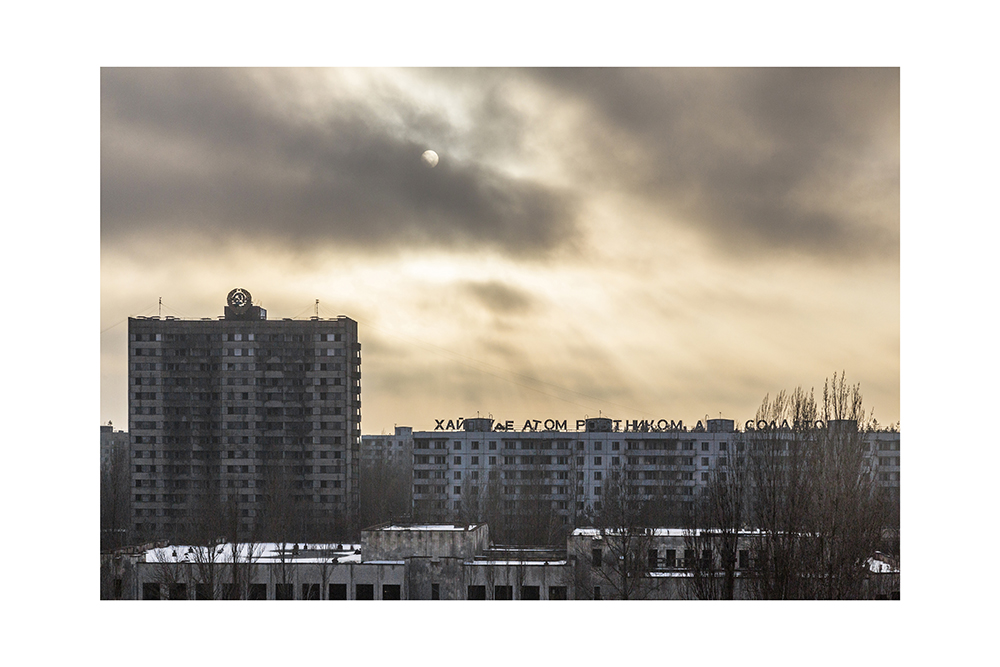 I have been selling prints for about six months, at a pace of about two a month. I thought it was time to offer one from my Chernobyl series. As of this writing, I have visited the Chernobyl exclusion zone seven times. Now I am even taking groups there, and I was supposed to go back three times this year before the coronavirus episode started.

Obviously I have thousands of photos of the whole region but I chose this one for several reasons. The first one is of course the dramatic aspect of the sky, which barely lets the rays of the sun through. Then comes the essential, the subject: two of the most emblematic buildings of downtown Pripyat seen from the former Hotel Polissia, another major place of the now ghost town. The emblem of the Communist Party of the USSR can be seen on the roof of the building on the left. Out of frame on the right, on an identical building, one can find the very similar emblem of the Communist Party of Ukraine. On the roof of the central building still stand the following words: « LET THE ATOM BE A WORKER NOT A SOLDIER ». Pripyat was built in 1970, at the height of the Cold War, at a time when for three decades the atom has been used mostly for weapons-related works. Another use is of course energy, here used in the neighboring nuclear power plant called « V.I. Lenin NPP ».